[He's gone, thankfully! Puppet wanders off to write his drivel memoirs on how he robbed, I mean saved Britain.  42 day detention sums him up nicely. Blair without the charisma, and it aint pretty--just shows what you can hide with charisma--think Bill Clinton also. Chief New Labour bandit and Iraq war money man (gave impassioned speech to Cabinet in support of war, revealed in Robin Cook's memoirs), now off to massacre African children with a vaccine drive (AIDS & pneumococcal vaccines), no doubt funded by a raid on the taxpayer.  Great boost for the vaccine companies.  Bill gates must have given him that idea.
Brown sold half of Great Britain's gold holdings, some 415 tons, at an average price of $315 per ounce. Less than a decade later the price (at the closing of the market in the US today, Nov 10, 2009) was $1105 per ounce, an unnecessary loss of $9,178,800,000, within a few years the loss will probably grow to twice that.  Now that is what you call a bank job!]

[2012 Oct] THE PAEDOPHILE RING THAT ENCIRCLES BRITISH POLITICS  BY S.C. (NAME PROTECTED) AND GIOVANNI DI STEFANO  Brown is known for sexually abusing numerous boys, as well as girls. He is known for a particularly vile rape in Aberdeen in the 70's, when he and 2 others paid a prostitute for access to her 9 year old daughter. They all raped her several times, and some years later the girl went to court to get custody of her little brother because of her mother's abuse, and drug use. She won the case and has had custody of him ever since. The records have vanished from court, but the victim still remembers what happened, and who did it.

"Many of you know my interest in Israel and in the Jewish community has been long-standing…My father was the chairman of the Church of Scotland's Israel Committee. Not only as I've described to some of you before did he make visits on almost two occasions a year for 20 years to Israel — but because of that, although Fife, where I grew up, was a long way from Israel with no TV pictures to link us together — I had a very clear view from household slides and projectors about the history of Israel, about the trials and tribulations of the Jewish people, about the enormous suffering and loss during the Holocaust, as well as the extraordinary struggle that he described to me of people to create this magnificent homeland."- Gordon Brown in a speech given to the Labour Friends of Israel in April 2007, as quoted in the Israeli paper The Jerusalem Post, "New British PM will likely be friend to Israel", June 27, 2007.

Tony Blair as 'Miranda '  HE WHO PAYS THE PIPER by T. Stokes  Interestingly a score of names of frequent visitors to these care homes including pop musicians DJs and top politicians. Was a gag order imposed by Tony Blair,? including mention that Gordon Brown was close to several rent boys and Sarah Macauley was paid Ł50,000 to marry him and stay the course, this out of publisher Robert Maxwell's 'black widow fund' which went usually to Zionist activists. 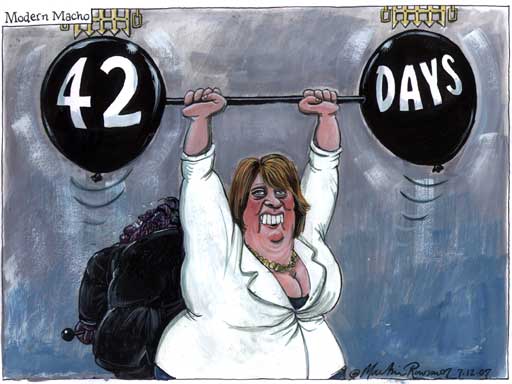 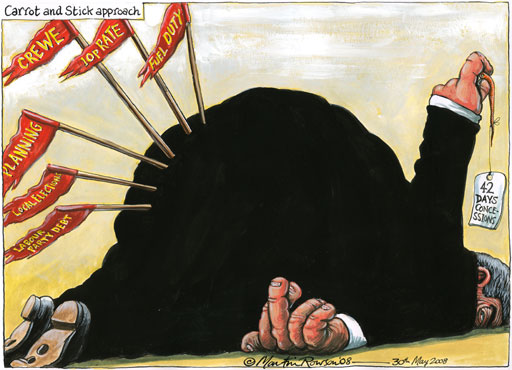 At a private party in Clapham. London, in 1986, the Treasury Financial Secretary Norman Lamont revealed that Gordon Brown was a practising paedophile, and his activities were known to British, American and Israeli intelligence services, Rupert Murdoch, and his senior editor at the Sunday Times. Lamont had been the director of Rothschild Asset Management at N M Rothschild & Sons. He told this to the British television media scriptwriter, Mike James. Norman Lamont was then elevated to life peer as Baron Lamont of Lerwick in 1998, and promoted to Chief Secretary to the Treasury in 1989, and Chancellor of the Exchequer in 1990. Scriptwriter Mike James was then run out of the UK and lives in exile in Germany, and sometimes Africa, etc. From 1936 to 2003, Gordon Brown's name popped up again and again related to paedophilia, paedophile rings, and the 1996 Dunblane Massacre of 16 school children and their teacher. [2010] THE SEX COLLECTORS - How the World is run on Shame - Vol. III, HEROIN TICKET by Greg Hallett

George Robertson was very close to Thomas Hamilton, and due to his association with paedophiles, he was elevated to Lord Robertson, and promoted to the Secretary General of NATO (11 October 1999-5 January 2004) where he excelled in heroin trafficking. Tony Blair and Gordon Brown had a vested interest in "wasting" the Dunblane paedophile victim children who were beginning to talk. So. at their request, the gun for Thomas Hamilton was organised by George Robertson. Michael Forsyth. and Robert Bell. Edinburgh Evening News. 23 March 1996. front page lead: "Chairman of British Foreign Secretary Malcolm Rifkind constituency party at Edinburgh Pentlands, Robert Bell, sold guns and ammunition to Thomas Hamilton only a few weeks before the Dunblane massacre. and it was reported he said he would sell him guns again." "Robert Bell supplied Thomas Hamilton with two .357 Magnum revolvers and two 9 mm Browning pistols with an alternating full metal-jacket and hollow point ammunition. This was despite Hamilton being a convicted child sex offender, and having close ties with a top policeman, etc.."'8 Conveniently the UK banned handguns soon after. This reeks of the Port Arthur Massacre in Tasmania, Australia (46 days later) where on 28 April 1996, 35 people were killed and 21 wounded. That was blamed on the retard. Martin Bryant (23). Two weeks later. Australia banned all sorts of guns. [2010] THE SEX COLLECTORS - How the World is run on Shame - Vol. III, HEROIN TICKET by Greg Hallett