The Killing of a Cure. The Murder of Max Gerson

In the mid 1950s, after spending his entire life researching and creating a modality that practically put an end to all the major diseases of the 20th century – including cancer—Max Gerson was quietly putting together 30 plus years of his work into book form. Then along came his secretary, an efficient woman who looked after things, was just what he needed to manage his clinic, his out-patient work, new patients, and document his findings in a massive tome.

Then, just as he finished his manuscript, “miss helper” took off with it, taking the only copy he had—the original. Keep in mind, these were the days before copy machines and the like. That's when Max got even more bad news. He found out that he was suffering from massive arsenic poisoning; a parting gift from his secretary.

Even though in advanced age, his healthy approach to curing modern diseases was enough to stave off this attack, allowing him to recreate from scratch his wonderful book:

Once the book was published, he found that yet again, he had been poisoned by person or persons unknown. This time, the dose they slipped him was completely fatal. He was dead by the end of the year.

Dr. Albert Schweitzer said this of Dr. Gerson: “I see in Dr. Max Gerson one of the most eminent geniuses in medical history.”

This is a common theme among those great souls that come to earth at just the right time, to bring it a way out of hell, hopelessness, and despair. Every single person I know, knows of at least 10 people that have died or are dying in the last few years of cancer. In America, current cancer rates are 1 in 2 Americans.

There is a way out of hell. And it is his therapy.

And I can prove it to some degree, with my own family.

Two years ago, as some long time readers recall, my son Matthew severed several nerve channels and tendons in his left hand on Christmas day. It took a week before a surgeon could be found that would work on him. In Los Angeles, where surgeons are a dime a dozen. By the time he got to him, his tendons and nerve channels had retracted up into his wrists, etc. 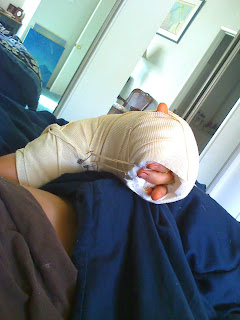 The surgery left him with enormous keloid scar tissues of skin, muscle, and nerves. Things were a mess. He did all the physical therapy he was told to do. But at the end of the day, he couldn't grip anything with that hand without much pain or strength. All at the age of 16. 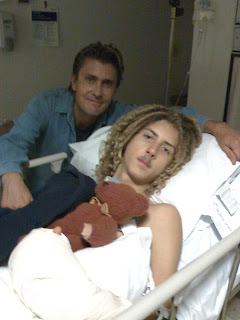 So, he and I agreed to put Max Gerson's claim of eliminating and repairing tissue to the test last summer. We took some before pictures then, showing the mess.

We are going to take some after pictures and publish them.

He not only has full recovery of his hand and strength, but the massive walnut-sized lump in his hand has disappeared to the size of a pea. All nervous channel functions have been restored.

We call this a success.

God bless you Max and Charlotte Gerson. For being there.