They can track 30+ million cars (UK) and c. 400 million mobile phones every day 24/7 from satellites, as well as read 100 million number plates 24/7, yet need a base unit every 500 yards for mobile phones with a huge amount of power?  Yeah, right.

The one death tower per two thousand inhabitants figure is something I came up with after busting all the death towers in several cities, simply keeping track of the number of towers busted compared to population statistics.  It's been pretty consistent, though in some places, like Sacramento, California, there are obviously a lot more towers than one per 2,000 and in some other places there are a lot less.

Dr von Peters, who spends a lot of time teaching in various medical schools in Russia, told me unequivocably that he's seen absolutely NO death towers in that country, though everyone has a cellphone.

The one per 2,000 concentration seems also to be relevant in much of Africa and Latin America.

I'm glad you showed an example of higher concentration of gthe death towers because I didn't want my casual count to be considered authoritative,  after all.

We're hard pressed to find actual cell repeaters, which these towers are purported to be.  An actual cell repeater can be operated with solar panels, as some are in Africa, but apparently most cell traffic is handled by satellites, which can now be shot into orbit with long cannons--the space shuttle is a big  boondoggle; a distraction for the more primitive among the PJ  folks but probably sometimes used to place heavy space weaponry,  at least, which is deployed against us (humanity), most likely.  It may have been space-based particle beam weaponry, for instance that shot at DB and Carol, several years ago, killing all the grass around where they were standing but otherwise neutralized by orgonite.

All death towers are fortified military assets, including concrete bunkers for backup  generators (presumably).  The streetlamp death transmitters are probably just an attempt by the world odor to regain some of what they lost when  we busted their more obvious death  transmitters.  The first time I heard of these was when some went up in Toronto several years ago, shortly after Steve Baron and crew disabled all the thousands of death towers in that metropolitan area

Naming the various death towers may be a clever ruse, though, since all of them mainly just put out a huge amount of deadly orgone radiation, with the apparent capability of sending  this energy with pinpoint accuracy via satellite positioning and injected transponders in some cases.

When out gifting, I always found maintenance technicians to be driving cell phone company trucks, by the way, which probably is designed to assure the PJ folks that these towers are for communication.   Of course, none of these 'companies' compete with each other.  If they did, our media would be loaded with Coke/Pepsi-style advertising wars

The death towers are probably the best standing evidence of the existence and purpose of the world odor.  I can't imagine that we'd be able to find a reading audience regarding fighting the world odor if this evidence weren't in place.

I don't know if tower surveys are a new development but, if they are, maybe they're symptomatic of the world odor's current need to 'justify' the death towers to the PJ folks..  The complete absence of information about these weapons' technology is another  evidence that the info is classified, which is to say, 'military.'

I'm pretty sure that the sewer rat agencies are chewing their fingernails up to their elbows under the circumstances because I think genocide was supposed to have been achieved very shortly after the sudden erection of these millions of death towers, six years ago, and now, suddenly, many PJ folks are finally starting to notice them and are probably a little pissed that all they're getting for explanations is technobabble and anagrams.

Years ago I didn't dare dream that something like this could come about!

Regarding the comments abougt nuclear warfare against humanity--it's terrific that this news is finally getting  out but I think it's important to observe that the projected goal of disabling the populations of the oil regions and other areas through genetic poisoning hasn't been achieved after sixty years of trying.  In fact, they were more or less forced to stop blowing up nukes in teh atmosphere early on.   I read some evidence that nukes were detonated in 17 American states,  by the way, and I knew a man who was ordered to sit in a trench in a Southwestern state the mid-1950s with the rest of his US Marine battalion, right in front of a nuclear detonation. Most of them died and this fellow later got brain cancer.

Our Dr. Stevo, who is in the business of clinicly tracking the effects of the world odor's efforts to kill all of us off on many fronts,  observes that humanity are harder to exterminate than cockroaches, in spite of the world odor's best (sic) and lavishly funded, coordinated efforts to do so over the past several decades.

I'm all for sharing news about the world odor's grim intentions but I think it's a good idea to temper these offerings with evidences of their continuing; even  accelerating failure to achieve their grisly goals. Otherwise, all we're doing is advertising  for them, which is to say fearmongering.  Who isn't programmed to assume that destructive, parasitic global fascism is unopposable,  after all?  What does it take to erase that programming and replace it with something more viable and useful?

This is one of the new ones, 5 of these in one spot by Tesco 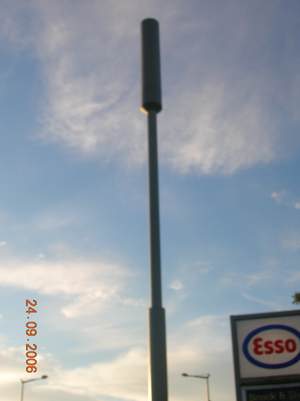 Yes, they are way behind shedule in their killing plans.

The radiation stuff is scary but I am glad she has come out and said it.  I was reading Dr Gofman to get that but wasn't having much luck apart from the mammogram radiation, another covert one.  If all wars are manufactured you had to wonder what all the tests were about.  And it gives you a new view of all the other rackets like vaccination.   They will find it harder to deny vaccine genocide, for example.  And all the animal holocausts like foot and mouth spring to mind.

Not sure what the solution to radiation pollution is, you did say orgonite is a solution for radiation poisoning.

And radiation therapy is another one, know of 4 year old girl with brain cancer (must see if she lives next to one), inoperable, and they are going to give her that.  Unless you have a white coat people wont wake up, so I don't tend to try any more, even my nephew went ahead and vaccinated his 2 kids.