[These are the many heads of Evil.  The government's are all Fascist pseudo-democracies, run by Big Brother/Illuminati, with the Corporations being the bandits, robbing the poor to pay the rich, with the Intelligence community acting as their Secret Police, while the Politicians dance on strings to keep the public mesmerised.  Run by psychopaths.]

"What I actually said was that there are three kinds of politicians: those who do not lie full stop, those who lie if they absolutely have to, and those who do not give a bugger about lying," Humphrys told the Guardian newspaper.

Our political life is a grotesque carnival designed to convince the rubes they live in a democracy. This is so they will pay taxes and lay down their lives for their betters.
Our rulers have determined that we shall have no real say in our collective future. Like livestock, we will chew our collective cud on sex, drugs, toys and trivia, which they will supply in abundance.
This explains why the mass media (incl. movies) and education long ago ceased to deal in reality, or teach civics or history. Instead they are purveyors of deception and conformity. The US election is really a job competition where a shortlist of candidates vie for the privilege of deceiving the public and implementing the banker agenda. [Aug 2008] I'm NOT on the Putin Bandwagon by Henry Makow 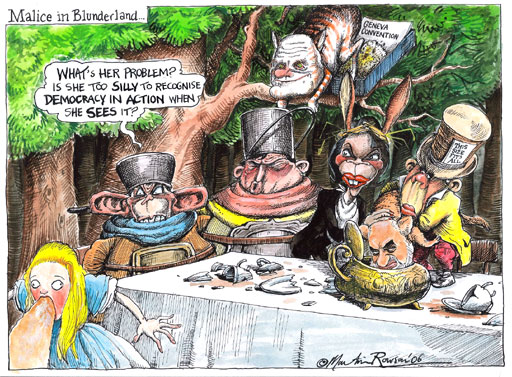