[Ideas dreamt up by Cesco.  They work better with crystals pointing up but not essential, just the inner 18 maybe.  You can use 3/4 fl oz muffins for the smaller arrangements--the smallest size used here has 12.3cm radius circle, 38mm wide TBs, 16mm deep (board 70cm wide).  The 108 is used to stop radionic attack on Orgonite businesses among many uses eg it has has attracted birds to to small garden.  We have observed dissipation of cloud cover with a 114 next to a CB.....]

See:  The Towerbuster (TB)  6 TBs in a circle  The hexagram

Our First 108's  Yes the 108 sure is a powerful device. Make sure to attach those pieces very firmly. If one comes loose and breaks the formation that energy changes pretty quickly.
Whale Orgone had a dead month in Feb, only 4 orders the whole time and 3 of those were from friends. After watching the bank balance get frighteningly low I asked the universe 'What's going on. Have I upset someone powerful?'
What happened next was quite something. '108' appeared to me 3 times in the space of a couple of hours: First in a conversation about something unrelated, then I checked my wireless network speed which was at 108 mbps. Finally, I added up the value of the orders I had received since the sales just stopped and the value was Ł108.
So I decided to go out and check the 108. One of my sheep had dislodged a piece and it was out of formation. The energy of the thing didn't seem particularly cohesive when I approached it but after restoring the formation the environment suddenly felt more settled and free-flowing.
Within hours I had received another order and they haven't stopped since. Take from this what you will. I am going to be putting the 108 into production soon, as they really should be around every home!
Thommy

My 108 And Electronic Jamming

[2012 May EW] Passive Protection Devices   I want to mention three passive devices that have been extremely helpful to many of us in at least diluting and scattering much of the energy campaign against us:  the 108, obsidian on Succor Punches and black candles. ...Nobody's figured out, yet, how the 108 seems to blast apart the magical aspects of the sewer rats' assaults on some of us but we don't need to understand something before we can use it and these are obviously harmless, after all.....We made a lot of 18s to toss in the sea for the dolphins and whales along the Kona Coast of Hawaii....Ben was making and selling smaller (about three feet diameter) 108s and we bought one last summer--it's in our bedroom.  I have a smaller one (made by myself) in the back of the SUV that I tow the trailers for the  boats and airplanes with. It's about 18 inches in diameter....I placed our two property 108s about a month apart and I'm glad I did because it gave us a better idea of range and effects.  The first one went under the front porch and after that it felt fine around the outside of the house but when we were in and around the hangar it still felt horrid.  As soon as I put the other 108 beyond the hangar the entire property felt fine and it's remained that way since the summer of 2009.

[2009] One One Four by laozu  The etheric dynamics of it are really different to the ones of the 108.
It created a strong flow of orgone towards the pattern from all directions.
The drawn DOR was transformed into POR and went right up into the sky.
This movement of Qi was very strong at the beginning, then slowing down.
On the next morning it was slightly noticeable, but still working in the same manner: creating a flow to the center and then moving the Qi up into the sky.
The 108 I had assembled in my workshop about a week or so before behaved different, more stable, but, nevertheless it built up a pleasant feeling of positive energy inside the house.

[EW 2009 July] 108  It is too soon to tell whether it is really working against the radionics on my biz. It hasn't been up for a day yet. But for what it's worth: my computer screen stopped flickering for the first time in a year (I had grown accustomed to that flickering! Thought it was due to old age. Hopefully it doesn't start tomorrow again, hehe). Physically, I felt my feet charka burning healthy unlike I have experienced in over a year too.

[Ew July 2008] Sylphs and 18s  Phil Schneider's dad was an associate of Al's during the Philadelphia experiment.  Capt Ernst Schneider went from being a commander of a cargo submarine to being the medical officer (US Navy Captain) of Project Rainbow.  The cargo subs were used to ferry equipment, etc., to the Vryal base in Antarctica throughout the managed conflict.  They got some of  their fuel from the Rockefellers' Standard Oil facilities in Argentina.  Montauk is the eastern tip of Long Island; an access point to New York City and the big sub base in Connecticut. It's also the site of a very old underground base, apparently Vryal real estate. According to Al Bielek, MK Ultra started there soon after the CIA was spawned in 1947 and it's a site, like Area 51, that is run by draconians and reptilians and  where a lot of alien DOR-based tech is 'downloaded' to the world order.

[EW April 2008] Kaleakakua Bay, Etc, April 2008--Don Croft
Carol had remotely monitored the energy of the 18s during the first day and it took several hours for the vertical beams of orgone from the devices to connect with the healthy orgone canopy, high above the island.

[EW March 2008] The Eighteen, the One-O-Eight and the Cescolator---Don Croft

To get the circles use the Flower and Seed of life method, keep drawing circles until you get the ones you want
For 114 one in middle, 6 around it.
For 108 use the outer circles that cut inside the centre one.

You will need to make a bar compass.

It works best for a 8x4ft sheet to make one in 2x2.  Bought bow compass on ebay (Ł10 for a set) and aim to hammer my last 2 compasses into dust with a sledgehammer, they were that bad.  Spent some time finding a bow compass even existed and then time finding one at the right price.  You can make one out of a bit of wood, pencil and nail which I probably will do as I need a wider radius for the 108 circles, maybe.

My one at its greatest length was perfect, bit of luck there, just hope the 10 3/4 radius isn't too small, effect wise. 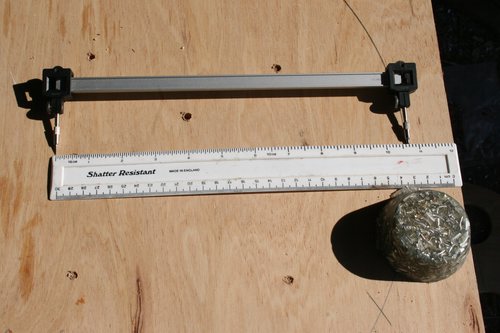 Home made bar compass using electrician's tape, need to pull it almost to breaking point, to get it tight.

This is one made using glazing mastic with 9mm ply--doesn't sink. 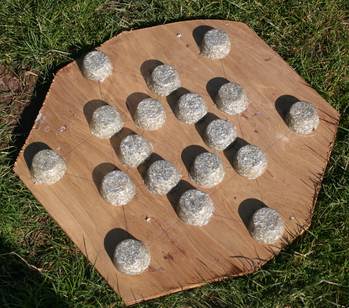 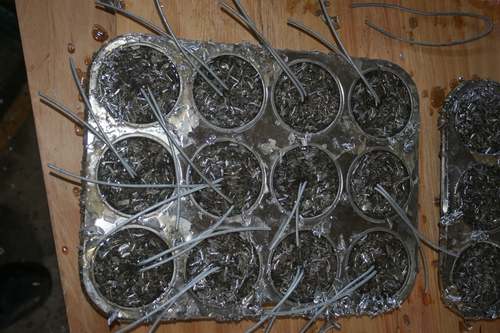 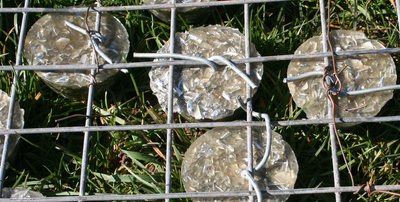 OK, but need to use smaller mesh, as seen below.

Used roofing/gutter bolts (6mm) next with bit of cardboard to hold them in place. 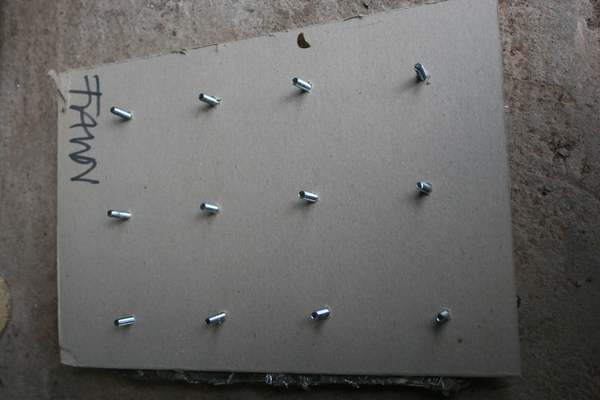 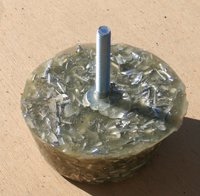 Doesn't matter if bolt not centre as you can drill hole where it is needed. Cesco didn't like the energy effect of the bolts, preferred to use glue method.

Raw linseed my be a good idea to delay decay, what we use on outside hardwood doors.

Template for metal one and for 18 buried in ground: 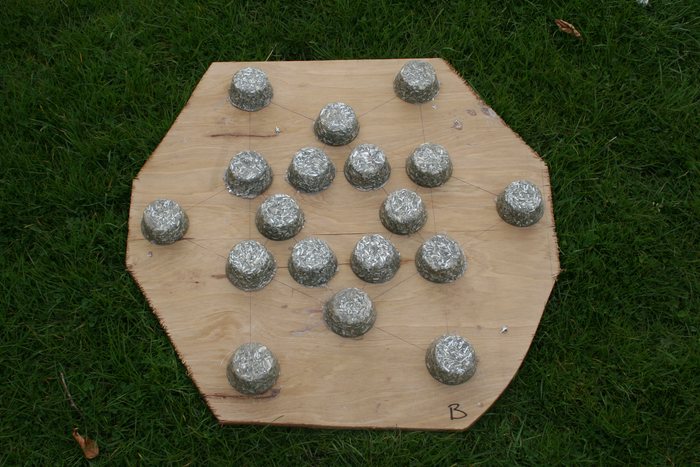 This is the best mesh to use: